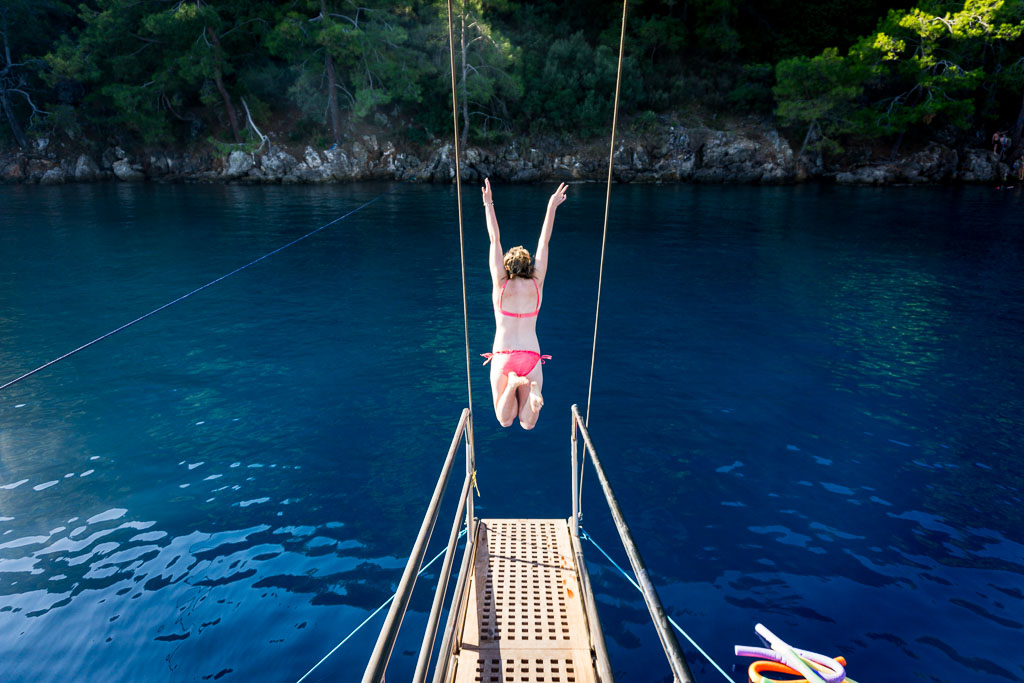 Day 3 of Sailing Turkey began extremely early for Scott and I sleeping on the deck – the anchor was pulled up at 4:30am (and was extremely noisy!) before we had a very rocky, long sail to our next destination. 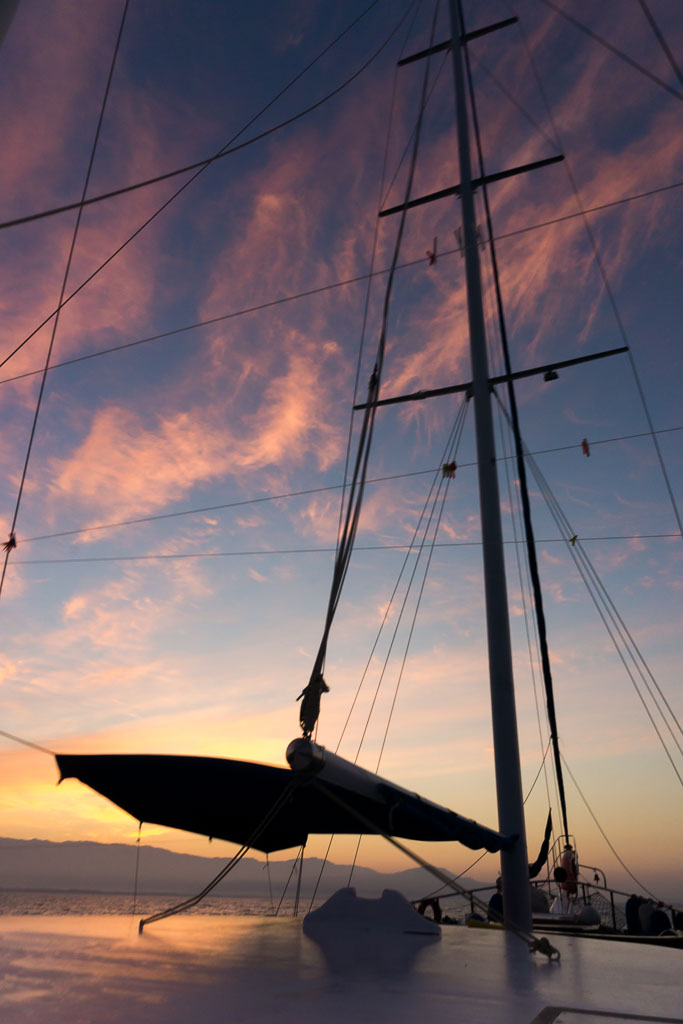 Such amazing sunrises greeted us every morning.

We finally got there about 4 – 4.5 hours later and were keen to go for a swim and explore the coastline and a little island. 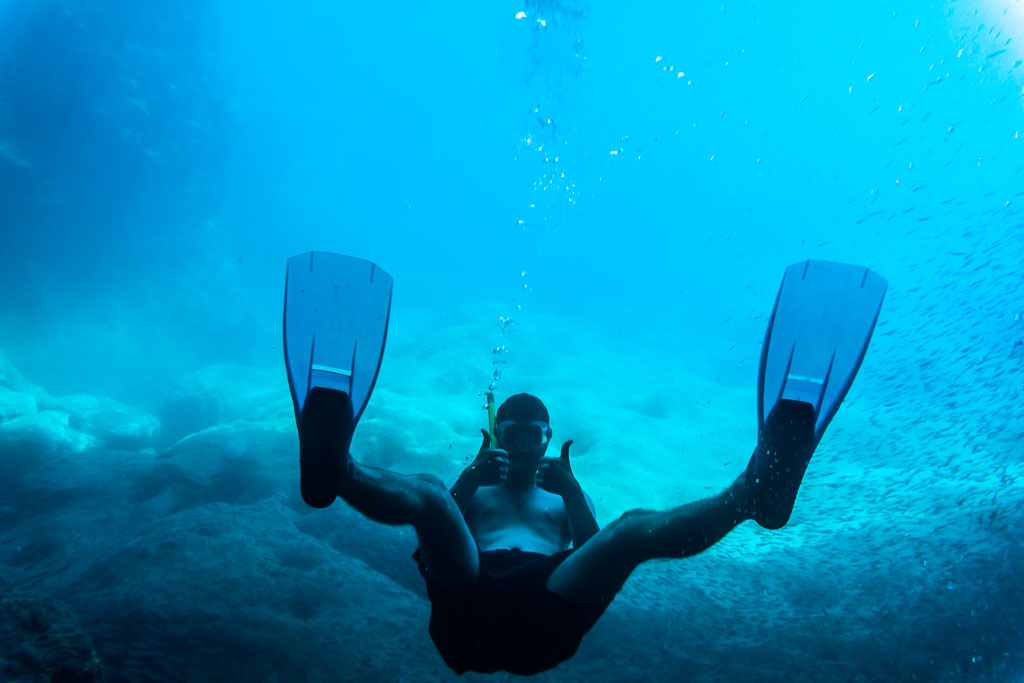 Scott had grabbed some snorkel gear but he mainly saw just rocks and a few fish. After he had enough, I put them on to have a look, first thing I see when I go under – a shark!!!!

Trying not to panic I come back up and convince myself it’s just a weird shape rock but nope went back under and it was still a shark – a 1.5m shark – it’s not moving but still!! Throwing the snorkel gear back at Scott, I tell him it’s a shark and use all my years of swimming lessons and got back to the boat! Scott however is convinced it’s dead and wants to go closer to have a look – logically I knew if it wasn’t moving it must be dead but surely that would attract more of them right??

Thankfully (and I think this was purely because of how panicked I was) Scott came back to the boat with me, where we continued to swim but right near the steps for a quick escape!

Afterwards, someone told us that they had been scuba diving near there and because there wasn’t much to see they had dropped in a bunch of statues including one of a shark! My panic was all for nothing, but seriously who does that?!! 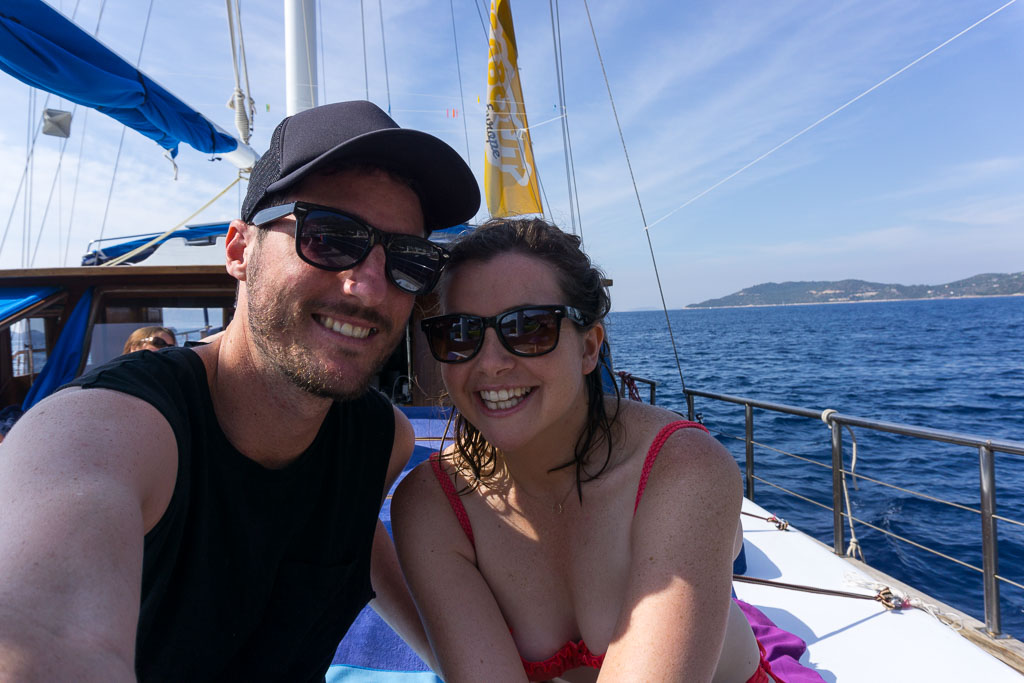 Safe and sound, back on the boat after the “shark.”

Thankfully, the afternoon was spent on land. We got to explore the town of Kas which was quite pretty. We wander the streets, having a look in lots of shops before enjoying an ice cream! (PS – Cappucino and Caramel are an amazing combo!!) 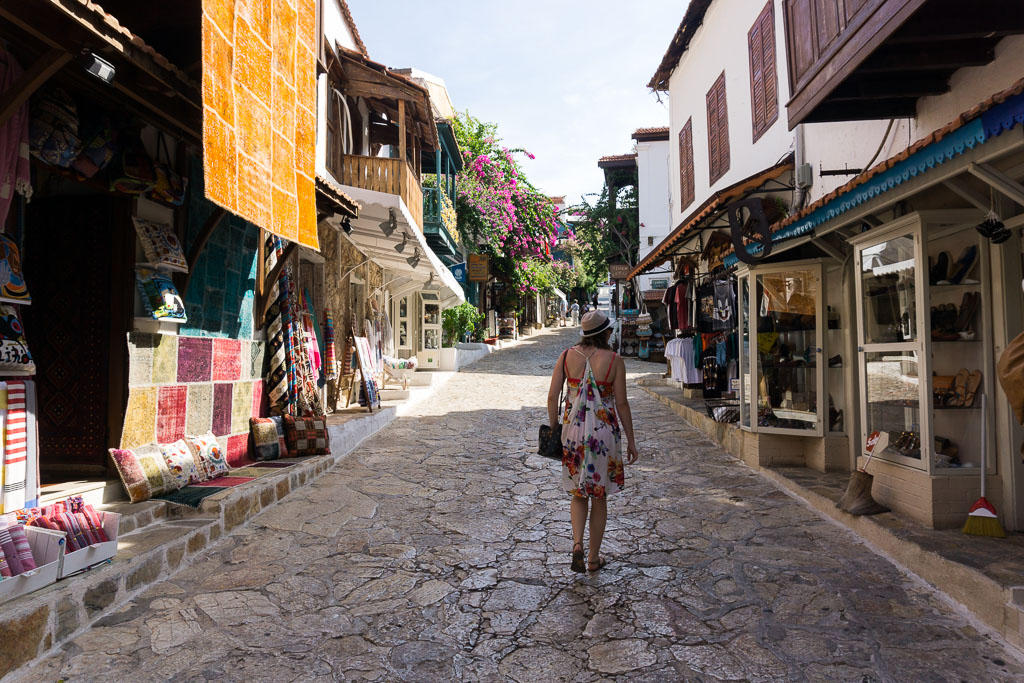 Happily on land, wandering around Kas

This morning started with a sail over a sunken city. A whole city sunk into the sea after an earthquake! Unfortunately you can’t swim here anymore but it was pretty cool to sail over, you could see old doorways, staircases and rooms. 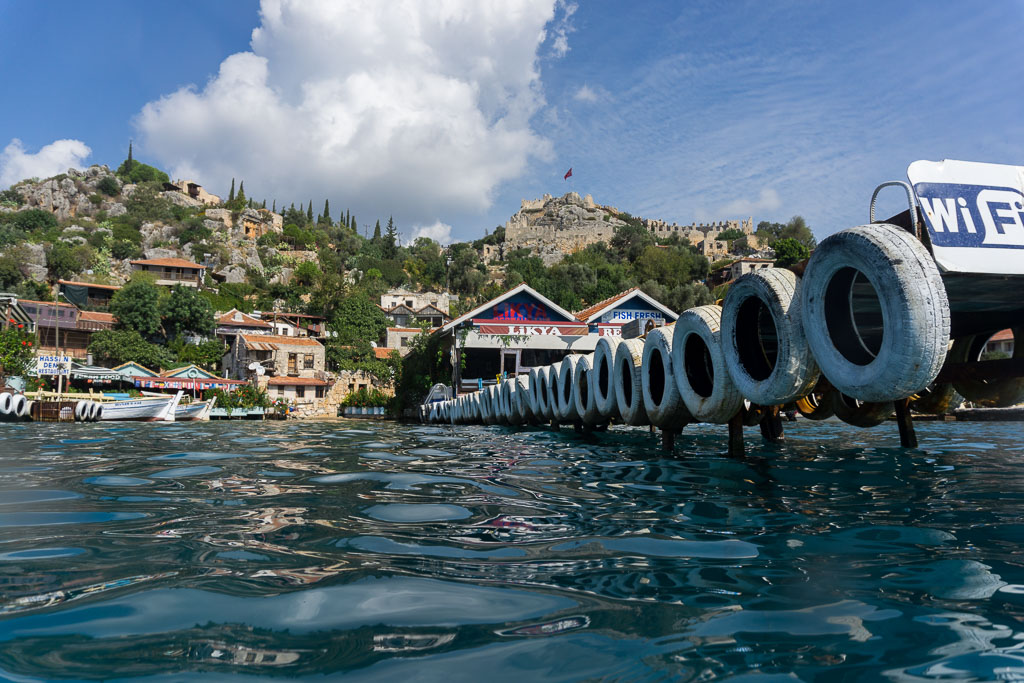 The very cute town of Simena.

We went ashore nearby to a very cute town called Simena. This was a very cute town. There are no roads here just old pathways zig zagging up a mountain lined with cute cafes, shops and old ladies selling jewellery. 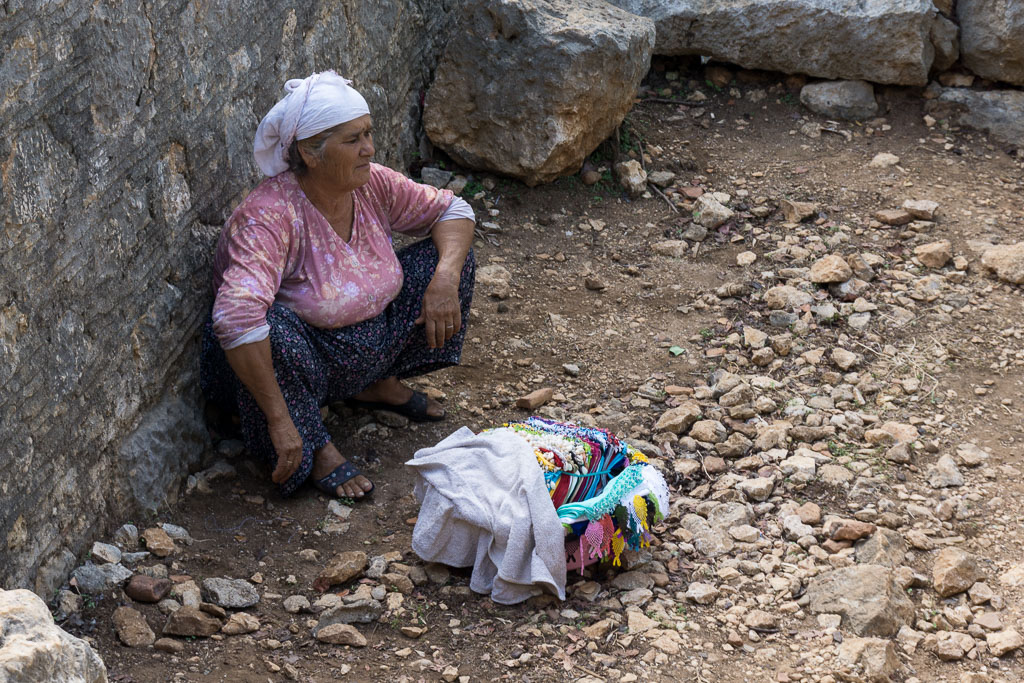 At the top is a very cool old fortress that has the most amazing views over the blue Turkish seas. 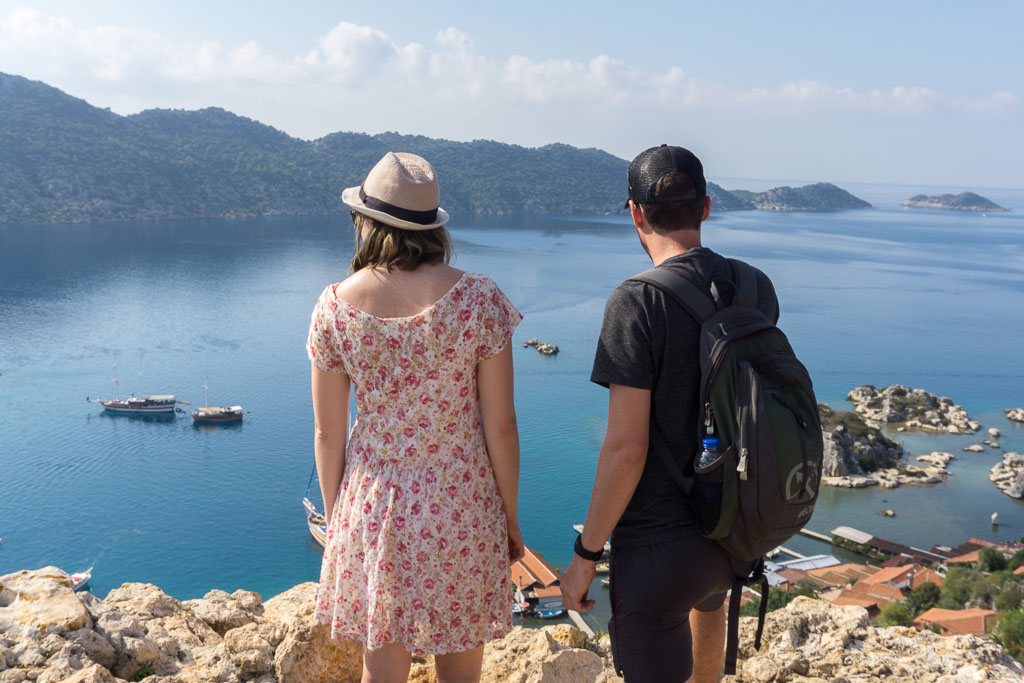 The view from the fortress!

It was lovely and we met the nicest guy at a cafe we stopped at for more ice cream (this was homemade and delicious!!) Was a very cool place to explore for a couple of hours. Even better, this is home to lots of sea turtles!! They were so cute! 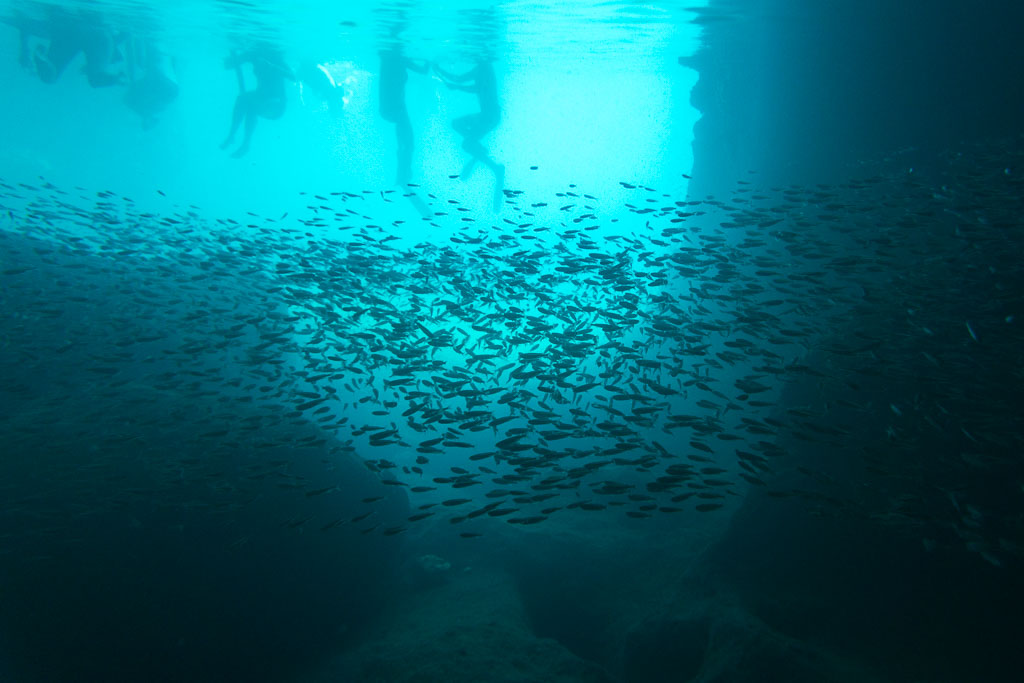 So many fish in the cave, thankfully no sharks (or shark statues!!) though.

We headed from there for another swim near this very cool cave (still a little freaked out from my non-shark incident the day before) I didn’t venture too far in but it was beautiful and filled with so many schools of fish!! 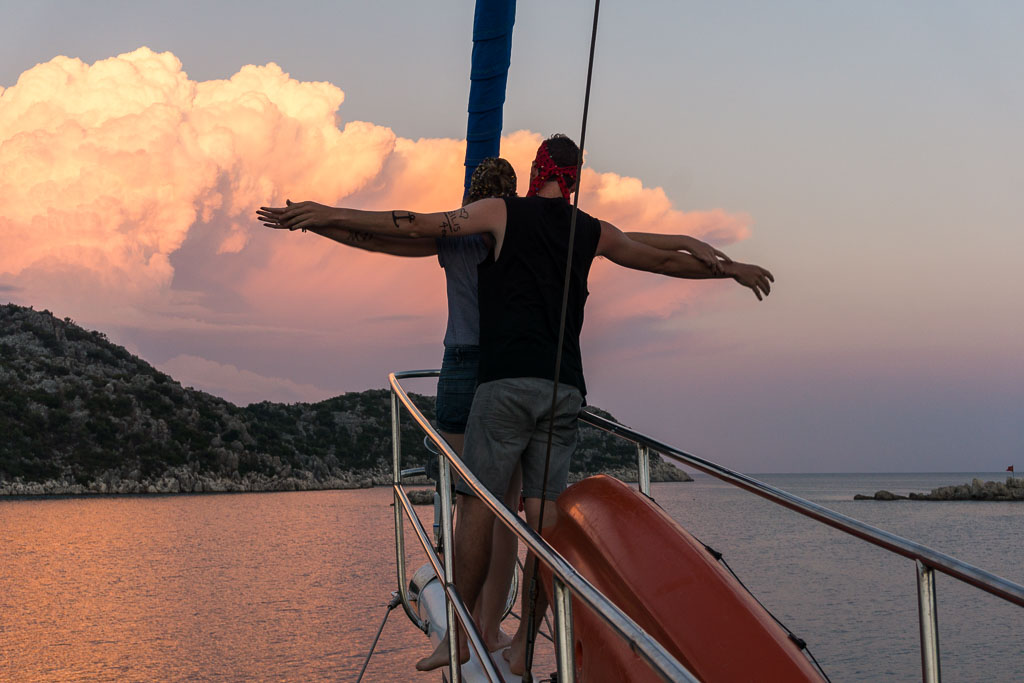 Our must have Titanic moment.

To end Day 4 of Sailing Turkey, we headed to Smuggler’s Cove where we were taken by a little boat to Pirate’s Bay (a bar on an island – nothing else) for a pirate party! Was a pretty fun evening dressing up like pirates and dancing, and we had the most amazing sunset to have a ‘Titanic’ moment – even if we were dressed as pirates!! 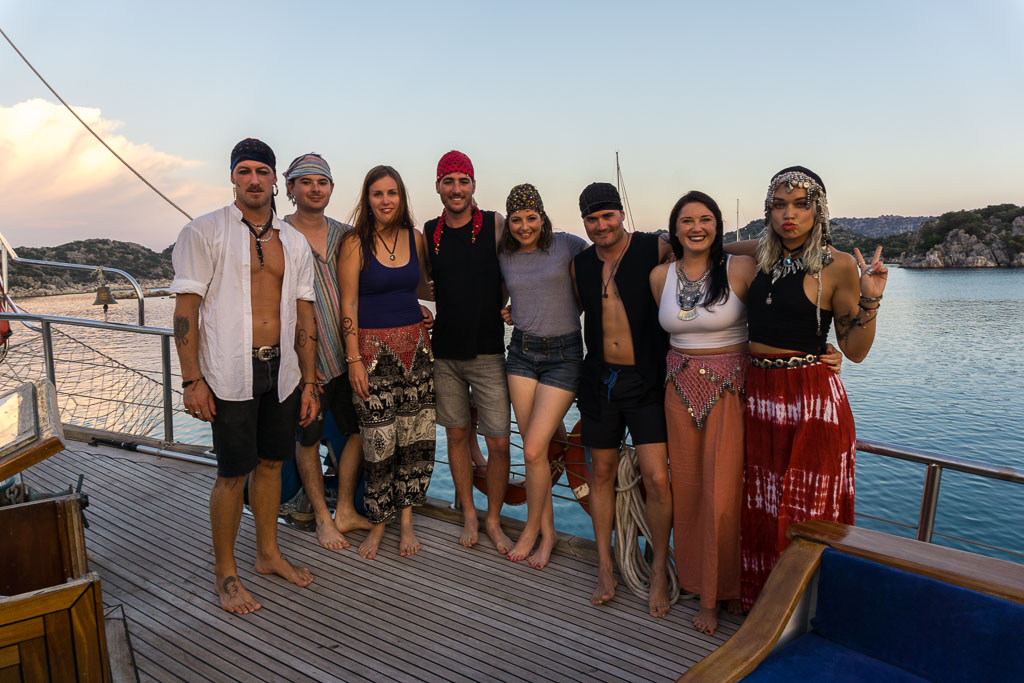 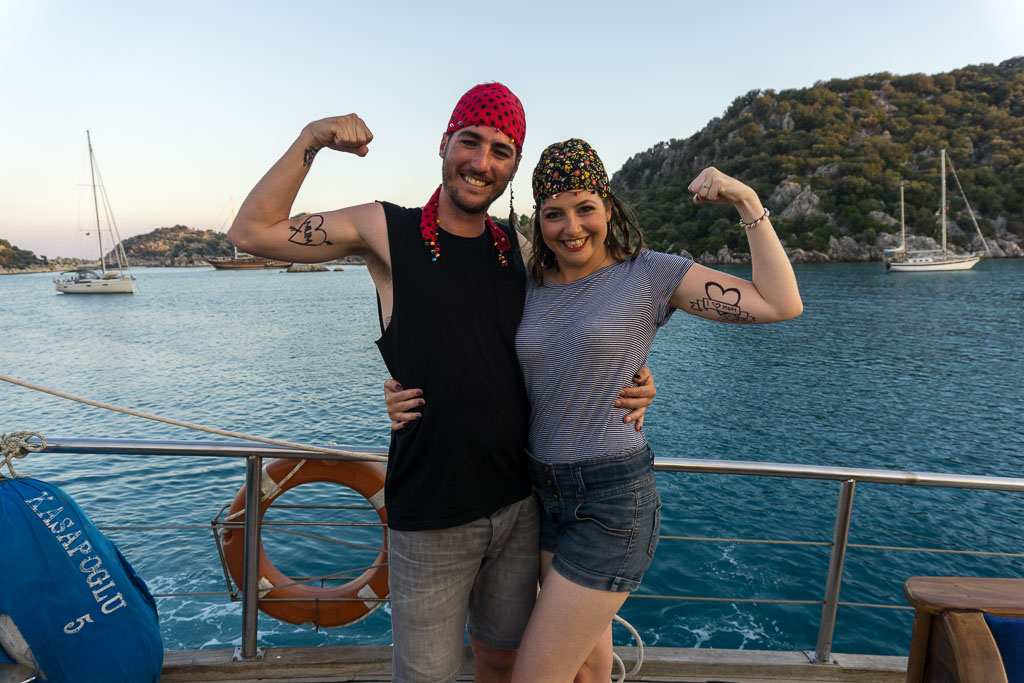 Everyone was a bit slow this morning – and I would just like to point out as some advice – it did not seem fun to be hungover on a boat!! Thankfully Scott and I were fine and were pretty excited to explore Myra and Demre today. 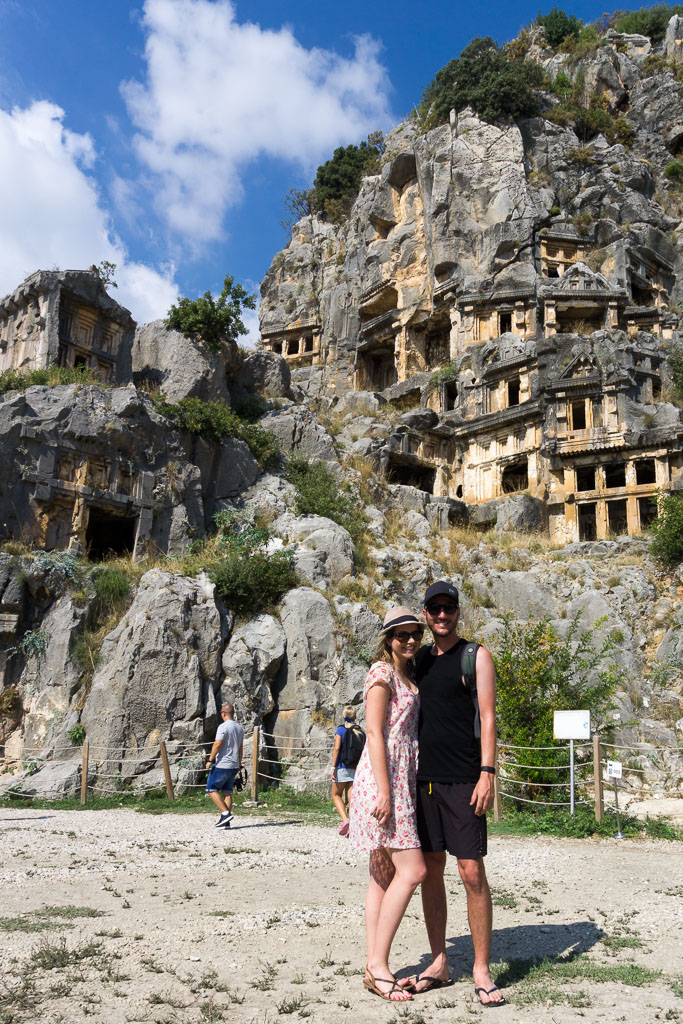 The Myra Tombs were incredible!

We headed first to Myra which has very cool, ancient tombs built into a mountain, they are amazing and have so much detailed carved into them, it’s incredible to think what they have survived. At Myra there is also a massive ancient amphitheatre which was huge and lots of fun to explore! 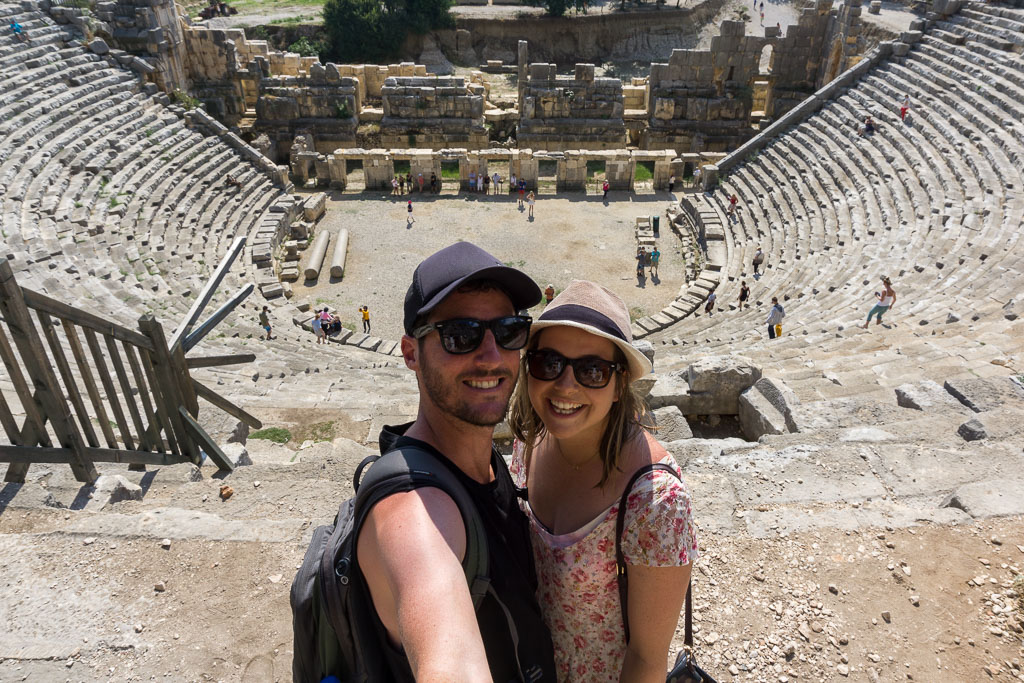 The Myra Amphitheatre was enormous!

After that it was onto the town of Demre. This was kind of what we expected more of the Turkish towns to be like thanks to all the movies (or in Scott’s case video games), but none of them have really been like it until Demre. It was a bit run down, very empty feeling but it was kind of cool to walk around and see, they also had enormous Turkish flags over their roads! They are a very patriotic country, everywhere we have been has Turkish flags everywhere – just hadn’t seen any on this scale before!! 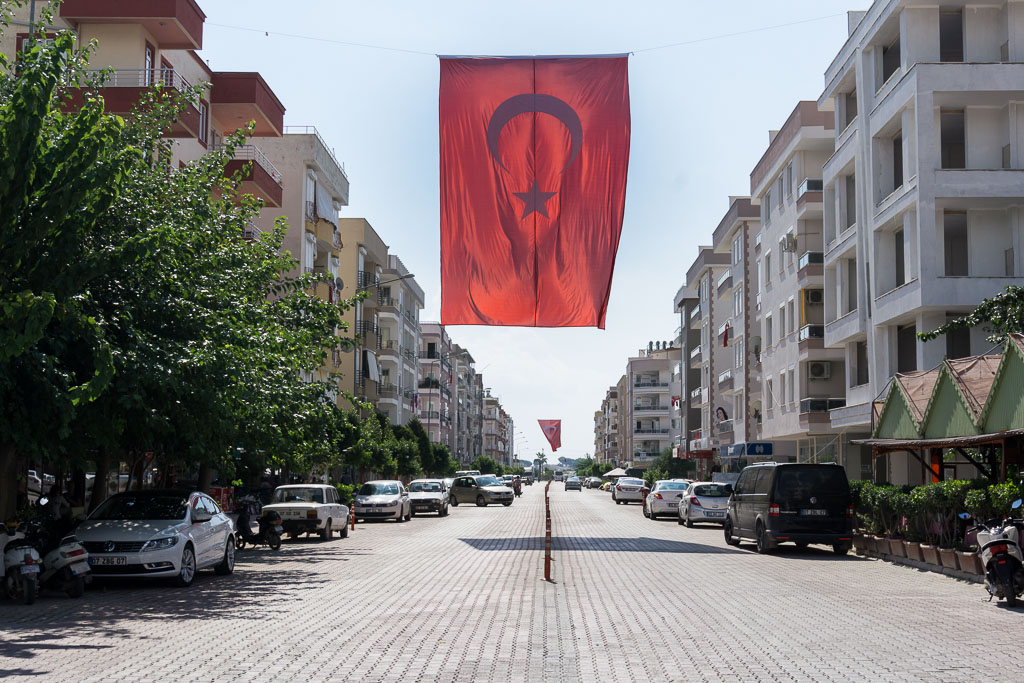 We ended up enjoying a movie under the stars with all of us lying on the top deck and trying to watch a movie playing on a laptop. Not really that practical but it was still heaps of fun! 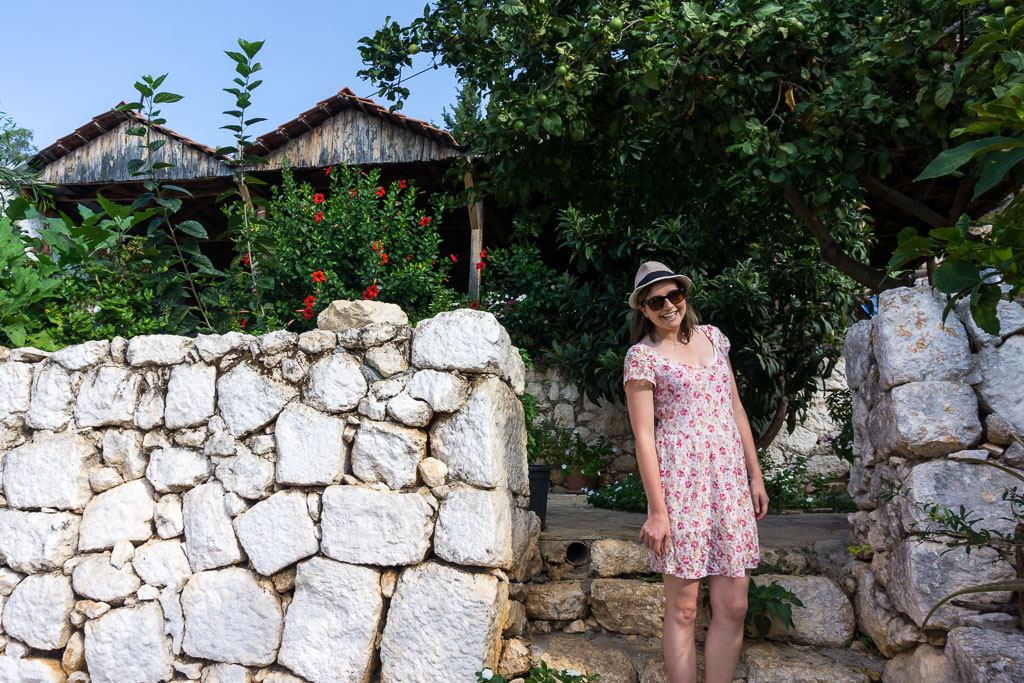 Simena, you are so cute!

Keep up to date by following our Instagram and we would love to hear from you if you want to leave us a comment below. 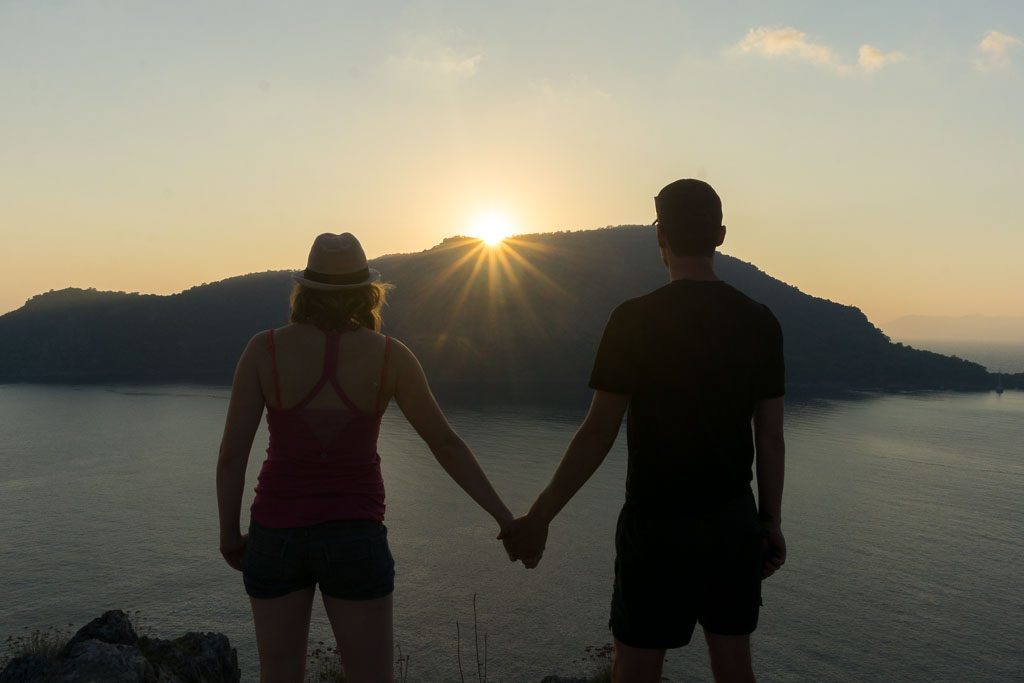 Leave a Reply to Cancel Reply